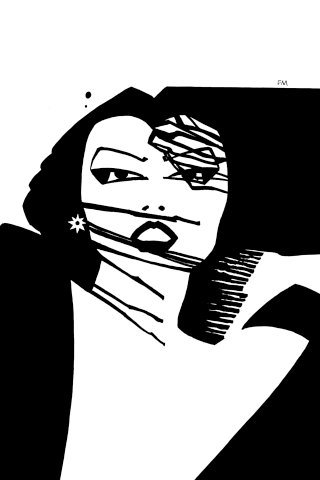 Family Values is the fifth volume graphic novel in Sin City, a brilliant comic noir series by Frank Miller. Originally published in 1997, it is the direct sequel to That Yellow Bastard. Unlike its prequels, which were first published as limited series, is intended as a graphic novel from the beginning.

Sin City Volume 5: Family Values sees the reappearance of Dwight McCarthy (also main character in A Dame to Kill For and The Big Fat Kill) and Miho (also appears in The Big Fat Kill). Gail, leader of the prostitutes of the Old City, has sent Dwight on a mission to investigate a raid on a small dinner by the mob. The investigation reveals that city is now under a threat of the possibility of a war between two big mob family, Don Magliozzi and Wallenquist.

With deadly little Miho always near to watch his back, Dwight tries to dig deeper into problem to see if the heat between the mob groups could cause any harm to the girls of Old Town. In dealing with the thugs, Dwight will have to go through some hard times. However, Miho is always on the watch and she is always ready to draw blood.

Marking a departure for Miller from an entire career of serialized stories, this 128-page epic spilled out of him all at once . . . and you can’t help but read it the same way! Family Values is a milestone among Miller’s work, allowing him enough room to tell this classic story of grit and revenge exactly the way he wanted to. With deadly Miho running on roller-blades, Dwight running on adrenaline, and the Sin City mob on clean-up detail, this yarn from the Town Without Pity is not to be missed.