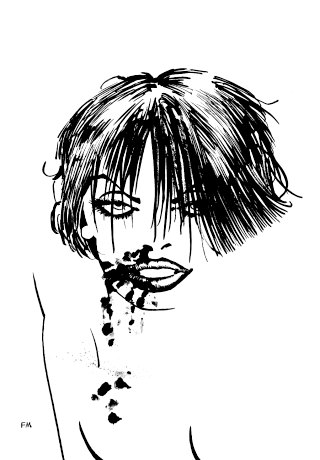 Originally published in 1993 as miniseries, A Dame to Kill For is the second volume of Sin City graphic novel series. sequel to The Hard Goodbye. Written and illustrated by Frank Miller, the comic series has achieved huge success critically and commercially. Praised for its simplistic yet powerful artworks, unique characters, and strong story plot, the comic noir has drawn many dedicated fans worldwide.

The story in Sin City Volume 2: A Dame to Kill For focuses around Dwight McCarthy, a photographer who takes photos for shaddy and questionable purposes for a man called Agamemnon. He is surprised when he gets a call from Ava Lord, the woman who broke his heart four years ago. Ava tells Dwight that she is unhappy with her marriage and that she is abused by her husband Damien Lord.

Despite being failed by Ava time and again, Dwight can not resist himself from taking the lure of the woman. In his effort to get close to Ava, Dwight is brutally beaten to near death by Manute, Ava husband’s escort. Dwight then teams up with Marv, his buddy from Old Town. Together they sneak into Damien Lord’s house. From there on, Dwight has lead himself into a difficult path that will take him to see the hideous truth behind the woman he is crazy for.

Preview of Sin City Vol. 2: A Dame to Kill For by Frank Miller (from Dark Horse Comics)

It’s one of those hot nights, dry and windless. The kind that makes people do sweaty, secret things. Dwight’s thinking of all the ways he’s screwed up and what he’d give for one clear chance to wipe the slate clean, to dig his way out of the numb gray hell that is his life. And he’d give anything. Just to cut loose. Just to feel the fire. One more time.

And then Ava calls.

Start Reading Sin City Volume 2: A Dame to Kill For by Frank Miller