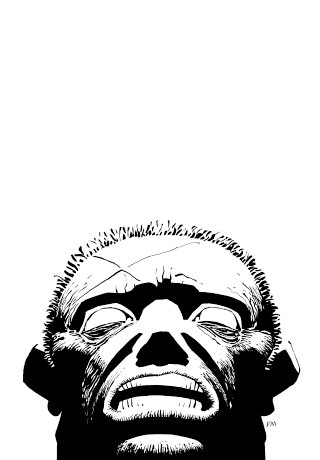 Originally published as a limited comic series of 6 issues, That Yellow Bastard is the 4th volume of the bestselling Sin City graphic novel series. It’s released as the direct sequel to the 3rd book The Big Fat Kill. Written and illustrated by Frank Miller, the comic noir series has gained wide popularity among comic readers and critics. It also became one of the story plots adapted into the Sin City film.

The story in Sin City Volume 4: That Yellow Bastard is quite different from the rest in the series. Despite focusing on persons from outside the law, this one follows the story of a man from inside the law. John Hartigan is a relatively good and honest police officer and on the day before his retirement he decided to save 11-year-old Nancy Callahan from the vicious little-girl predator, Roark Junior. The problem was it meant Hartigan was dealing with the son of the most powerful, corrupt person in Basin City.

Hartigan did save Nancy and nearly killed Junior but the corrupt system framed him as the child predator and he went to jail. In 8 years, Hartigan suffered behind bars and Roark Senior was doing anything he could to avenge what Hartigan had done to his son. When he thought Nancy was in danger, Hartigan finally surrendered and admitted the crimes he never did so he can get out of jail. He was determined to once again protect Nancy and he had to deal with a new enemy from the past, the Yellow Bastard.

Just one hour to go. Hartigan’s polishing his badge and working himself up to kissing it goodbye, it and the thirty-odd years of protecting and serving, tears, blood, and triumph that it represents. He’s thinking about his wife’s smile, about the thick, fat steaks she’s picked up at the butcher’s, about the bottle of champagne she’s got packed in ice, about sleeping in till ten in the morning and spending sunny afternoons flat on his back. But with one hour left to go, he gets word about that one loose end he hasn’t tied up: a young girl who’s helpless in the hands of a drooling lunatic. Just one hour to go … and Hartigan’s gonna go out with a bang.