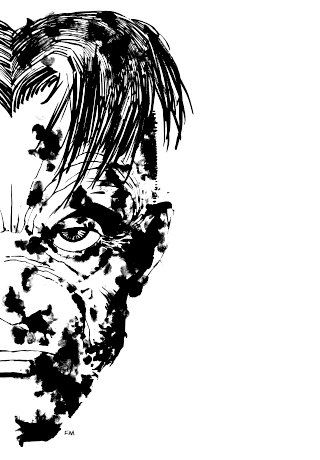 Frank Miller’s masterpiece, the Sin City comic series, continued with the 3rd graphic novel in 1994: The Big Fat Kill. As the direct sequel to the 2nd book A Dame to Kill For, this volume expanded the success of the comic noir series. With distinctive characters, brilliant story, and pungent black-and-white illustrations Miller has captured comic fans across the globe. The series has gained critical acclaims as well as commercial success.

Sin City Volume 3: The Big Fat Kill follows the story of Dwight McCarthy, who has new face following the events in the previous volume. It all starts with Dwight trying to protect Shellie from the drunk Jackie Boy and his fellows who has forced their way into Shellie’s room. After receiving “strong warnings” from Dwight, Jackie and his gang leave. Listening to his instinct that Jackie Boy could make a bloody mess, Dwight decides to follow him.

Jackie’s car then pulls into Old Town and he persuades Becky, one of the Old Town prostitutes, to give him the service. Seeing how drunk Jackie is, Becky refuses and it annoys the guy. When Jackie pulls out his gun to threat Becky, what Dwight worried about turns out to reality. Jackie Boy’ stupid act will lead to a big bloodbath in Old Town.

Criminals have always called the shots in Sin City, whether bootleggers, gamblers, or politicians. But ever since the first dame set up shop in Old Town, those side-streets have been run by the women who walk the night. It’s been a delicate truce, but now there’s a messy body and the mob’s looking to reclaim those licentious streets. They’re going to have to put down a tight band of dangerous women and a guy named Dwight to do it. Now Dwight, he knows something that the mob’s gotta learn the hard way: sometimes standing up for your friends means killing a whole lot of people…