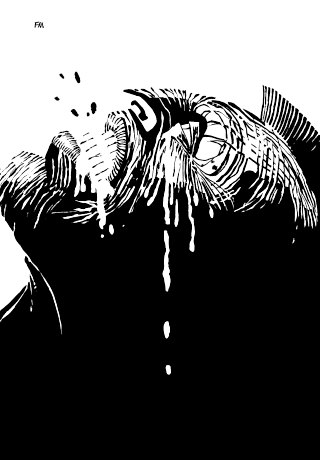 The Hard Goodbye is the 1st volume of Sin City graphic novel series by Frank Miller. The comic noir series has captured worldwide readers who admire its story and artworks. The minimalist black-and-white illustrations used by Miller in the books create a brilliant atmosphere that enhance the thrill of the story.

Sin City Volume 1: The Hard Goodbye graphic novel follows the story of Marv, a bulky and tough professional assassin. He is not actually a looker, instead most women and men will stay away from him because of his look. So, when the beautiful prostitute Goldie approaches and gives herself to him, Marv is in heaven and worship the girl.

After spending a wild night, Marv wakes up and finds Goldie is dead right next to him on the bed. He is shocked someone has been able to sneak up and, above all, he is furious that someone murdered Goldie, who has been nothing less than an angel for him. When the police suddenly track his location, Marv believes that someone is trying to frame him on the murder.

By carrying out an investigation, in his own rough and bloody way, Marv finally finds some clues that the murder of Goldie is connected to one of the most powerful figure in the country. However, that fact won’t stop Marv from going wild on a rampage to avenge the death of his angel.

Legendary artist Frank Miller opened a noir opus in Sin City. This critically acclaimed triumph – honored by both an Eisner Award and the prestigious National Cartoonists’ Award – combines the pulp intensity of writers like Spillane and Cain with the gritty graphic storytelling that only Miller can deliver. Sin City is the place – tough as leather and dry as tinder. Love is the fuel, and the now-infamous character Marv has the match … not to mention a “condition.” He’s gunning after Goldie’s killer, so it’s time to watch this town burn!