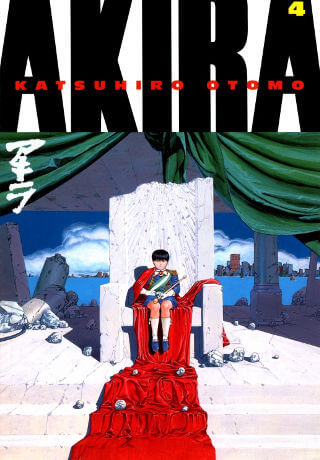 Akira Volume 4, subtitled ‘Kei I’, is the 4th collected edition of the thrilling and brilliant AKIRA manga series. Written and illustrated by Katsuhiro Otomo, one of Japan best mangakas, the series has achieved massive commercial and critical success. Originally published as serials the collected edition was first released in 1987. The English version graphic novel was first published by Epic Comics and later by Dark Horse Comics.

The previous book saw Neo-Tokyo was once again blown up after Akira unleashed his power. In that catastrophic incident, Tetsuo made his sudden and surprising reappearance while Kaneda disappeared in the explosion.

Akira Volume 4 presents ruined, post-apocalyptic Neo-Tokyo. A reconnaissance team from America enters the city secretly under the lead of Lieutenant George Yamada. Yamada witnesses how the destroyed city is now ruled by two factions. One is the Great Tokyo Empire, which is a faction of zealots who worship “Lord” Tetsuo, who uses Akira as the figurehead. The other faction is the followers of the esper Lady Miyako, who provides the poor refugees with food and medicine.

Obsessed to keep his reign, Tetsuo orders the Empire’s psychic shock troops to continuously pursue and destroy Lady Miyako’s group. The Empire also hunts down the missing esper children, Kiyoko and Masaru. Meanwhile former rebels Kei and Chiyoko, and also the Colonel are hide themselves under the protection of Lady Miyako.

Despite holding the reign, Tetsuo constantly suffers terrible headache and grows more and more dependent on the pills issued by the previous government. He is also having haunting visions about Akira. Couldn’t take the suffering any longer, Tetsuo makes an unexpected act. He visits Lady Miyako at her temple and asks her for answers. Miyako thoroughly reveals the history of Akira and the government project behind it. She then tells Tetsuo that he can grow more powerful and able to control Akira if he is able to quit the pills.

Set off by the bullet of a would-be assassin, Neo-Tokyo has been leveled by Akira’s godlike psychic fury. Now cut off from the rest of world, the Great Tokyo Empire rises, with Akira its king, Tetsuo its mad prime minister, and a growing army of fanatic acolytes. Forces on the outside still search for a way to stop Akira, and the answer may lie in the hands of the mysterious Lady Miyako, a powerful member of Akira’s psychic brotherhood. But the solution to harnessing Akira may ultimately be more dangerous than Akira himself!

Review of Akira Volume 4: Kei I

Despite having the roughest start so far, Vol. 4 of AKIRA ends up standing head and shoulders above its predecessors…The story suddenly gets a hold of its tone and pace, and the book turns into an adventure. The panels whizz by like a blur, with each picture kinetically connecting to one another, creating in the mind a sense of motion which I’ve never before experienced in a graphic novel…The story flies by, first two panels at a time, then two pages at a time, and then twenty pages at a time. Suddenly the book is done, and you find yourself starving for more. At this point, it makes me a bit sad to know that I have only two volumes remaining in AKIRA. I could read this forever. (by Andrew Kyle Bacon, goodreads.com)