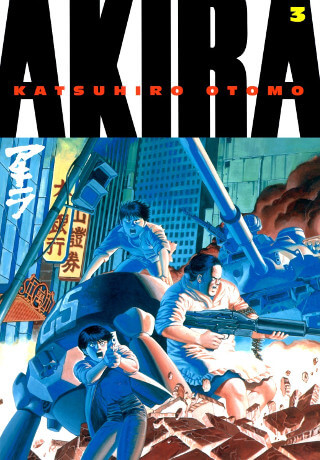 Akira Volume 3, subtitled ‘Akira II’, is the 3rd collected edition of the fantastic AKIRA manga series. The series, written and illustrated by Katsuhiro Otomo, has been a huge success commercially and critically. Originally released in 1986, the English version graphic novel was first published by Epic Comics and later by Dark Horse Comics.

While the previous book has ended with a bang, Akira Volume 3 delivers even more thrilling fast-paced story and more massive outburst. After Tetsuo vanishes in an explosion, Kaneda and Kei escape the JSDF base and taking Akira with them. Knowing Akira is out in the wild, some powerful people deploy their force to find Akira and will crush anyone who attempts to hide the boy. Among of those powerful people are Lady Miyako, who is also en Esper, and the Colonel, who has taken over the government and established martial law over Neo-Tokyo.

Being chased by such vast force and betrayed by an ally, Kaneda, Kei, along with Akira and fellow rebel Chiyoko, are finally being cornered. Every side tries to lay their hand on Akira. Within all the commotion, a tragic incident befalls one of the Espers and it revives something inside Akira. Something absolutely terrible is about to happen!

In the 21st century, the glittering Neo-Tokyo has risen from the rubble of a Tokyo destroyed by an apocalyptic telekinetic blast from a young boy called Akira — the subject of a covert government experiment gone wrong now imprisoned in frozen stasis. But Tetsuo, an angry young man with immense and rapidly growing psychic abilities, has done the unthinkable: he has released Akira and set into motion a chain of events that could once destroy the city and drag the world to the brink of Armageddon. Resistance agents and an armada of government forces race against the clock to find the child with godlike powers before his unthinkable destructive abilities are unleashed! One of the true international classics of graphic fiction and unavailable for nearly a decade in America, Akira has once again taken America by storm, its first Dark Horse volume selling out almost overnight in comic shops and bookstores across the country!

AKIRA only gets better as it goes. The characters develop, the plot becomes more intricate, and the art gets more and more polished. The detail in many of the panels is incredible. This is an incredible improvement over the first two volumes. The last sixty pages of this book are some of the most cinematic and beautiful panels I’ve ever seen in a graphic novel. The revelation of AKIRA is stunning to behold. Vol. 4 can’t arrive soon enough. (by Andrew Kyle Bacon, goodreads.com)