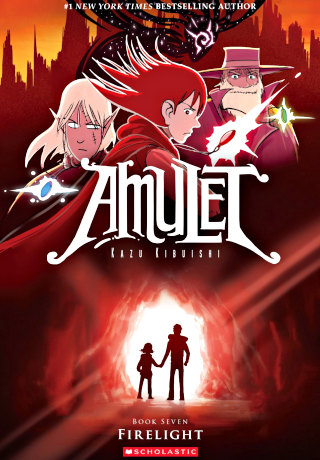 Originally published in 2016, Amulet #7: Firelight is the 7th volume of Amulet children fantasy graphic novel series by Kazu Kibuishi. The comic series has run for 8 years and developed a globally wide readers. It has also gained generally positive reviews from critics.

Amulet #7: Firelight graphic novel picks up the story left by its prequel, Escape From Lucien. In their journey to the Algos island, Emily, Trellis, and Vigo captured Gabilan from whom they learn about the stollen memories of Trellis childhood. They also learn the truth about the “dark shadows,” one of which is the Voice.

Enticed by the Voice from her Amulet, Emily goes into a memory of the man who accidentally caused the death of her father. Unable to help it, Emily lets hatred and vengeance slightly slip into her feelings. It triggers the power of her Amulet which then completely overwhelms her and turns into a firebird. The firebird flies into the real world so it can use Emily as part of the shadows’ scheme.

Preview of Amulet #7: Firelight by Kazu Kibuishi (from scholastic.com)

The unforgettable seventh installment of Kazu Kibuishi’s #1 New York Times bestselling series!Emily, Trellis, and Vigo visit Algos Island, where they can access and enter lost memories. They’re hoping to uncover the events of Trellis’s mysterious childhood–knowledge they can use against the Elf King. What they discover is a dark secret that changes everything. Meanwhile, the Voice of Emily’s Amulet is getting stronger, and threatens to overtake her completely.