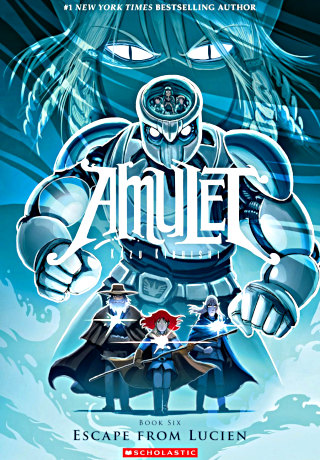 Amulet #6: Escape From Lucien is the 6th volume of Kazu Kibuishi’s masterpiece, the Amulet graphic novel series. The children, fantasy comic series has been successful critically and commercially since its first publication in 2008.

Picking up the story left by Amulet #5: Prince Of The Elves, its prequel, Amulet #6: Escape From Lucienshows that despite the promise he made to the Elf King to take down the stonekeepers, Max actually recruiting them in secret because he needs their power to defeat Chronos the mount giant. Meanwhile, in their way to bring their mech suits to Lucien, Navin and some of his friends fall off the air carrier and land around the city. They are attacked by the shadows and helped by Riva Ash, a young elf. When the shadows attack the people in the city, Navin and his friends need to act fast to save people. In other place, Emily are going back into the void with Max, where she finds a shocking truth and what she needs to do with the power her amulet.

Preview of Amulet #6: Escape From Lucien by Kazu Kibuishi (from scholastic.com)

Navin and his classmates journey to Lucien, a city ravaged by war and plagued by mysterious creatures, where they search for a beacon essential to their fight against the Elf King. Meanwhile, Emily heads back into the Void with Max, one of the Elf King’s loyal followers, where she learns his darkest secrets. The stakes, for both Emily and Navin, are higher than ever.