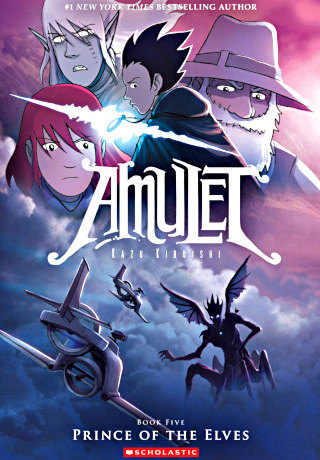 First published in 2012, Amulet #5: Prince Of The Elves is the fifth book of Amulet graphic novel series, sequel of Amulet #4: The Last Council. Written and illustrated by Kazu Kibuishi, the children fantasy comic series has gained wide popularity among readers. It also has received generally positive reviews from critics.

Amulet #5: Prince Of The Elves shows the background history of Max. How he got a vengeance against the people of Cielis and the reason he why he helped the Elf King to steal the Mother Stone. Emily and Vigo are now the Guardian Council. Along with the city guard, they are preparing themselves to fight against the Elf Army. However, by acquiring the last shard of the Mother Stone, the Elf King power grows even stronger. Secretly, in his attempt to stop terrible things done by the elves in the past, Trellis has make a dangerous journey by going back in time through the void.

Preview of Amulet 5: Prince Of The Elves by Kazu Kibuishi (from scholastic.com)

Emily survived the chaos of the Guardian Academy, but Max Griffin has stolen the Mother Stone. With it, the Elf King forges new Amulets that will give him the power to invade and destroy the nation of Windsor. Emily and her friends lead the soldiers of the Cielis Guard in a fight to stop him, but Max stands in their way. And when she seeks information from the Voice of her Amulet, she discovers that the Voice is much more sinister than she ever could have imagined.