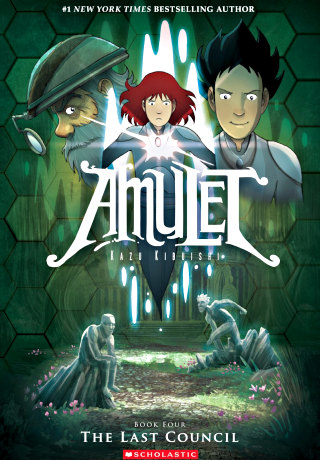 Amulet 4: The Last Council, first published in 2011, ist the 4th volume of the Amulet graphic novel series. Written and illustrated by Kazu Kibuishi, the wonderful fantasy, children graphic novel has been welcomed by comic readers and gained success.

Picking up the story left by Amulet 3: The Cloud Searchers, The Last Council follows Emily’s adventure in the city of Cielis. In her effort to see the Guardian Council she, accompanied by her new friend Max, she feels certain suspicion that things are not actually like what they look. She is forced to take part in a survival test with other stokeepers. However, the survival turns out to be more than a test and they could actually be in a perilous danger. Led by Max, who seems to have more knowledge about the place than other stonekeepers, Emily and her friends struggle to find their way out. And a shocking surprise of betrayal is awaiting for family.

Preview of Amulet 4: The Last Councils by Kazu Kibuishi (from scholastic.com)

Emily and her friends think they’ll find the help they need in Cielis, but something isn’t right. Streets that were once busy are deserted, and the townspeople who are left live in crippling fear. Emily is escorted to the Academy where she’s expected to compete for a spot on the Guardian Council, the most powerful Stonekeepers. But as the number of competitors gets smaller and smaller, a terrible secret is slowly uncovered–a secret that, if left buried, means certain destruction of everything Emily fights for.