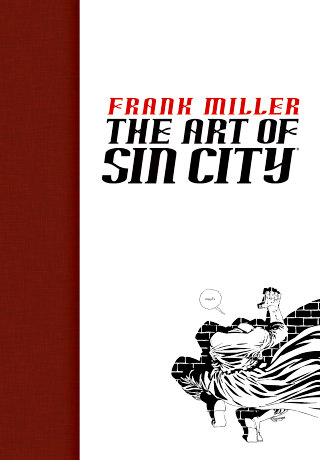 With well-known masterpiece such as Sin City, 300, Batman: The Dark Knight, and more, Frank Miller has established himself as one of the best comic writers and artists of his generation. His graphic novel series Sin City has successfully become a worlwide bestseller. It is a thrilling and brilliant neo-noir comic series featuring gripping stories and awesome dark artworks. The Art of Sin City is a “behind the scene” where readers can see what makes the series great artistically.

Set in a fictional grim place of Basin City, Sin City graphic novel series introduces many unique, interesting, and iconic characters such as Marv, Dwight McCarthy, Miho, John Hartigan, and some others. The title “Sin City” is probably self-explanatory enough that this graphic novel series is not meant for small kids. It features rough and adult scenes that are artistically delivered in a simple yet very effective way.

The Art of Sin City provides a glimpse of how Frank Miller created the amazing artworks in one of his best works. Fan of his works, artists, and comic readers will find this book precious.

Frank Miller’s Sin City has set the gold standard for crime comics, both for Miller’s unflinching stories and for his visceral, powerfully charged art. To honor the artist and his groundbreaking work, Dark Horse is proud to return Frank Miller: The Art of Sin City to print, now in an affordable softcover edition. An astonishing look into a master’s process, containing pieces both published and unpublished, and featuring items ranging from preliminary sketches to promotional images, this beautiful artistic showcase holds everything a Sin City fan, or connoisseur of fine art, could ever hope for.

Start Reading The Art of Sin City by Frank Miller