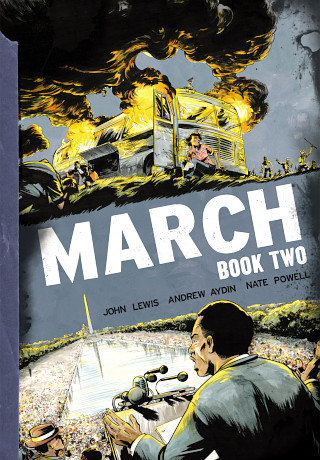 The second installment of March graphic novel trilogy, March: Book Two was originally released in 2015. Written by John Lewis in collaboration with Andrew Aydin and illustrated by Nate Powell, this amazing graphic novel about Civil Rights Movement in the US has won several awards and been accepted by readers and critics alike.

After the success of the Nashville sit-in campaign, John Lewis is more committed than ever to changing the world through nonviolence – but as he and his fellow Freedom Riders board a bus into the vicious heart of the deep south, they will be tested like never before.

Faced with beatings, police brutality, imprisonment, arson, and even murder, the young activists of the movement struggle with internal conflicts as well. But their courage will attract the notice of powerful allies, from Martin Luther King, Jr. to Attorney General Robert F. Kennedy… and once Lewis is elected chairman of the Student Nonviolent Coordinating Committee, this 23-year-old will be thrust into the national spotlight, becoming one of the “Big Six” leaders of the civil rights movement and a central figure in the landmark 1963 March on Washington for Jobs and Freedom.