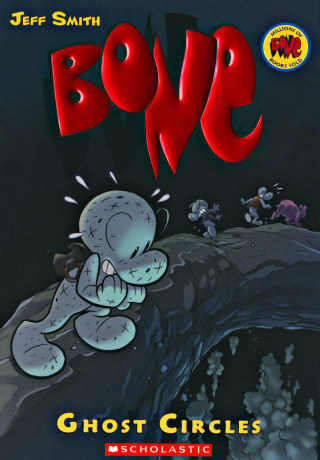 Jeff Smith’s epic Bone comic series continues with Ghost Circle, the 7th collected graphic novel edition. Described by by the Time Magazine “as sweeping as the Lord of the Rings cycles, but much funnier,” the series has recevied wide positive reponses from readers and critics. It has also gained commercial success around the world.

Meanwhile, the Bone cousins (Fone, Phoney, and Smiley) are running for their lives after facing the Hooded One (Briar) and the Lord of the Locust. Pursued by Kingdok, they must find their way out of an errupting volcano. When they finally manage to get out of the volcano, with the help of Bartleby, another peril is waiting for them. The Valley has vanished and they need to go to Atheia, and in between there are fields of Ghost Circles, invisible pockets of unreality wherein nothing can live.

A long-dormant volcano explodes, blacking out the sun, mowing down trees, and filling the land with soot and ash. The Lord of the Locusts is released with the eruption. Against this apocolyptic backdrop, the Bone cousins along with Princess Thorn and Grandma Ben struggle to reach safe haven in the city of Atheia.

Meanwhile, Lucius Downs lies severely wounded and trapped with the villagers in the camp at Old Man’s Cave.