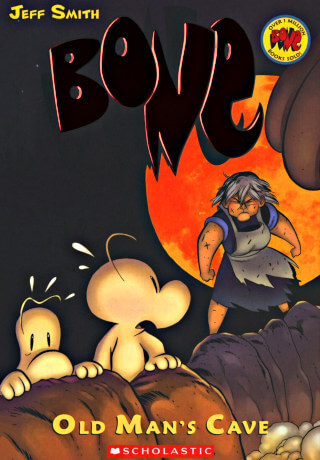 The thrilling and hilarious Bone comic series continues with the 6th collected graphic novel edition: Old Man’s Cave. The series has been globally successful and put Jeff Smith, the writer and illustrator, among renowned comic artists. The epic Bone comic series is enjoyed by young and mature readers alike and it is dubbed by the Time Magazine “as sweeping as the Lord of the Rings cycles, but much funnier.”

In Bone 6: Old Man’s Cave graphic novel, the situation in The Valley is getting dire. After the Rat Creatures openly attack the people and destroyed Barrelhaven town, it seems that war is inevitable. The villagers, led by Lucius, are regrouping with Granma Ben and the Veni Yan warriors at the Old Man’s Cave. In that place, Granma Ben reveals to Phoney Bone that The Hooded One is planning to capture and sacrifice him to free The Lord of the Locust.

Fone and Smiley Bone are convincing Thorn to trust on Granma Ben’s plan and that they should meet her at the Old Man’s Cave. Meanwhile, The Hooded one is also on the move and asks the enigmatic Roaque Ja to capture the Bones.

The villagers are divided whether they should just hand over Phoney Bone to the enemy or not, especially they who are still angry since Phoney has deceived him with the Dragonslayer scheme. Being afraid, Phoney Bone attempts to sneak away but Granma Ben and Lucius go after him. This incident leads to an unexpected meeting with the enemies.

A showdown with the rat creatures and a secret ceremony by moonlight; revelations and battles: The Bone cousins are in the thick of it again!The thrilling BONE saga continues in book six. As war spreads through the valley, the Bone cousins join Gran’ma Ben and Lucius at Old Man’s Cave to make a stand against the rat creatures.But not everything goes as planned. By the end of the book, Phoney Bone is strapped to a stone altar and about to be sacrificed; Thorn is lying lifeless nearby; and the rumblings of an earthquake suggest that the Lord of the Locusts is about to be released. Fone and Smiley Bone must do something drastic to save their friends.