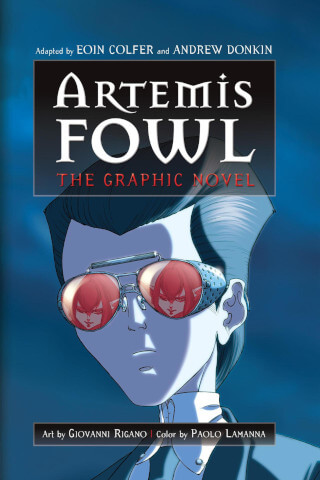 Originally published in 2007 Artemis Fowl: The Graphic Novel is an adaptation of the first installment of the famous fantasy novel series by Eoin Colfer Artemis Fowl. It is illustrated by Andrew Donkin, Giovanni Rigano, and Paolo Lamanna. The novel was successful and received positive reviews. While this graphic novel adaptation got mixed reviews, it still captured many fans of Artemis Fowl series and fantasy comic readers. The book was the followed by the second installment The Arctic Incident: The Graphic Novel.

Preview of Artemis Fowl: The Graphic Novel (from Google Books)

A stunning graphic-novel adaptation of the megaselling Artemis Fowl. This adaptation of his genre-busting, award-winning novel Artemis Fowl has been a labour of love for lifelong graphic novel fan Eoin Colfer, and Andrew Donkin. Art by Giovanni Rigano and colour by Paolo Lamanna.

Twelve-year-old Artemis Fowl is a brilliant criminal mastermind. But even Artemis doesn’t know what he’s taken on when he kidnaps a fairy, Captain Holly Short of the LEPrecon Unit. These aren’t the fairies of bedtime stories. These fairies are armed and they’re dangerous. Artemis thinks he’s got them just where he wants them, but then they stop playing by the rules . . .