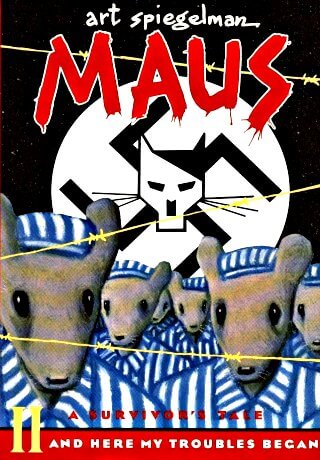 In Maus graphic novel series, Art Spiegelman recites the horrible experience of his father Vladek Spiegelman, a Polish Jew survivor of German Nazi’s cruel holocaust. The terrifying story is pictured in a cartoon world, where Jews are mice, Nazis are cats, and others are pigs. It binds two prevailing stories. The first story line is Vladek’s account of the dreadful fight for survival experience, outlining the paradox of daily life in the Nazi death camps, such as in Auschwitz. The other story line is Art’s narrative of how both he and his aging father struggle to keep their relationship.

At many levels and in many aspects, Maus II: And Here My Troubles Began by Art Spiegelman is a fabulous graphic novel that beautifully wraps the ultimate survivor’s tale.

The second installment of the Pulitzer Prize-winning graphic novel acclaimed as “the most affecting and successful narrative ever done about the Holocaust” (Wall Street Journal) and “the first masterpiece in comic book history” (The New Yorker).

A brutally moving work of art—widely hailed as the greatest graphic novel ever written—Maus recounts the chilling experiences of the author’s father during the Holocaust, with Jews drawn as wide-eyed mice and Nazis as menacing cats.

Maus is a haunting tale within a tale, weaving the author’s account of his tortured relationship with his aging father into an astonishing retelling of one of history’s most unspeakable tragedies. It is an unforgettable story of survival and a disarming look at the legacy of trauma.

* You can read Maus I graphic novel here. *