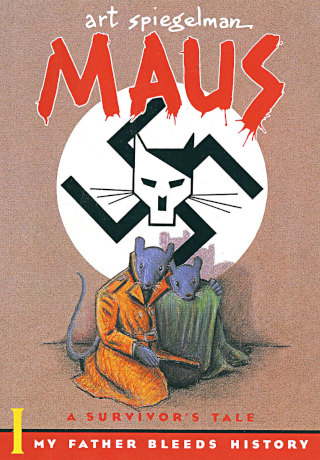 Maus I – A Survivor’s Tale: My Father Bleeds History by Art Spiegelman is an award winning graphic novel published in 1986. In this book, Spiegelman retold the story of his father, Vladek Spiegelman, a Polish Jew who survived Nazi’s viciousness during the Holocaust. In Maus I, Spiegelman represented different race with certain animal, although they still have human-shaped body. Jews were presented as mice, Germans and Polish were presented as Cats and Pigs. It has drawn vast academic attention in the English-speaking world and it became the 1st graphic novel that won a Pulitzer Prize (1992, Special Award in Letters).

As reflected in the title, Maus I – A Survivor’s Tale: My Father Bleeds History, the graphic novel pictured how Art Spiegelman retraced the history of his father, Vladek Spiegelman. From many interviews with his father, Art recaptured and recounted, in cartoon, the terrifying facts in his father experience and in history itself during Hitler madness in Europe.

The book interweaves two great story lines from two different periods. The first one is Vladek Spiegelman’s harrowing narrative about how he and his wife survived Nazi, which was full of numerous brushes with death, improbable escapes, and the terror of confinement and betrayal. The second story is the Art strenuous relationship with his old father as both of them tried to have a normal life.

The first installment of the Pulitzer Prize-winning graphic novel acclaimed as “the most affecting and successful narrative ever done about the Holocaust” (Wall Street Journal) and “the first masterpiece in comic book history” (The New Yorker).

A brutally moving work of art—widely hailed as the greatest graphic novel ever written—Maus recounts the chilling experiences of the author’s father during the Holocaust, with Jews drawn as wide-eyed mice and Nazis as menacing cats.

Maus is a haunting tale within a tale, weaving the author’s account of his tortured relationship with his aging father into an astonishing retelling of one of history’s most unspeakable tragedies. It is an unforgettable story of survival and a disarming look at the legacy of trauma.