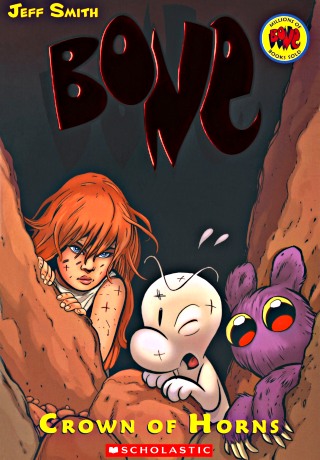 With the 9th collected edition, Bone 9: Crown of Horns, Jeff Smith delivered a wonderful end to the hilarious and epic Bone comic series. In its long run, Bone graphic novel series has entertain so many readers around the world and mesmerized critics. It is dubbed by The Time Magazine “as sweeping as the Lord of the Rings cycles, but much funnier.”

In Bone 9: Crown of Horns, the faith of the Valley and its people is hanging by a thread. Brair, The Hooded One, leads a vast army and finally lays siege on Atheia. Granma Ben leads the army of the Old Capital to defend their lives. A fierce battle happens at the walls of Atheira. Meanwhile, Thorn and Fone Bone is imprisoned in the dungeon. While sleeping, Thorn has a vision of her mother who tells her to find the Crown of Horns. After knowing about the battle, Fone Bone and Thorn make an attempt to break out from the dungeon.

Although the battle at Atheia finally ceases, the threat of the enemy is over. To stop Briar and the Lord of the Locust, Thorn, Fone Bone, and Bartleby has to get out of Atheia to go behind the enemy line. They will have to sneak into Briar’s lair inside the mountains and in their way, they meet with their old enemy Kindok. They will also find out that the dragons are trying to protect them from a much bigger enemy among the dragons.

Preview of Bone 9: Crown of Horns Graphic Novel by Jeff Smith (by Scholastic)

It’s full-fledged war as Briar, the rat creatures, and the Pawan army storm the city of Atheia. The Bone cousins, Thorn, and Gran’ma Ben are all there to defend the Valley and stop the return of the Lord of the Locusts.

When Thorn goes inside a ghost circle, she hears a voice urging her to seek the Crown of Horns. What follows is another dangerous journey for Thorn and loyal Fone Bone as they race to the sacred grounds of the dragons, searching for the one thing that may save them all — by touching the Crown of Horns.

This is the breathtaking conclusion to Jeff Smith’s nine-book graphic novel series.