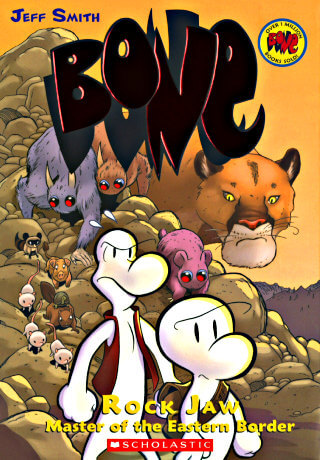 Rock Jaw: Master of the Eastern Border is the 5th collected graphic novel edition of the hilarious and epic Bone Comic series. Written and illustrated by Jeff Smith, the series has gained wide popularity and won numerous prestigious awards. It has received generally positive critical reviews and described by Time Magazine “as sweeping as the Lord of the Rings cycles, but much funnier.”

In this 5th book, Rock Jaw: Master of the Eastern Border, the story mainly focuses on Fone Bone and Smiley who are on a journey along with Bartleby, a little rat creature cub they found earlier. They soon enter the eastern mountains area where they come across Roque Ja—the Bone cousins called him Rock Jaw, the gigantic mountain lion who reign in the eastern border. Rock Jaw knows that The Hooded One is looking for one of the Bones.

Hilarious and thrilling events soon happen when the possum kids, who have befriended Fone Bone, and their raccoon friend Roderick lure the Stupid Rat Creature Duo to disturb Roque Ja so they can help the Bones. As usual, the Stupid Rat Creatures duo create chaos that luckily help Fone Bone and friends escaping Roque Ja. However, things are getting even more dangerous when King Dok appears along with a band of Rat Creatures army.

Preview of Bone 5: Rock Jaw – Master of the Eastern Border by Jeff Smith (by Scholastic)

In the fifth volume of the BONE saga, Fone and Smiley Bone strike out into the wilderness to return a lost rat creature cub to the mountains. But nothing is easyl First, they run smack into Rock Jaw, an enormous mountain lion with a none-too-friendly dispostion. Then they befriend a band of baby animals who have been orphaned by rat creature attacks. Everything comes to a head in an earth-shattering clash between Rock Jaw and Kingdok, the leader of the rat creatures.