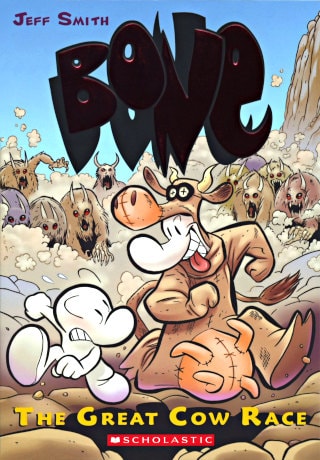 Bone 2: The Great Cow Race is the 2nd collected edition graphic novel of Bone comic series by Jeff Smith. The series has gained a lot of success, commercially and critically. The combination of thrilling adventure and hilarious characters have mesmerized numerous readers across the globe. Time Magazine referred to the series “as sweeping as the Lord of the Rings cycles, but much funnier.”

As said in the title, this volume focuses on the Great Cow Race that takes place in Barrelhaven. Granma Ben has been the reigning champion of this annual race for years. Accompanied by Fone Bone and Thorn, Granma Ben arrives in Barrelhaven for the race. However, the atmosphere in the village is different and people seem reluctant to bet on her. Meanwhile, Phoney Bone and Smiley Bone are convincing the villagers to bet on another contender for the race, which is the Mystery Cow.

That year, people of The Valley witness a totally different race. It turns into something they’ve never imagined before. With the presence of the monstrous Mystery Cow, and the unexpected appearance of a band of Rat Creatures army, the Great Cow Race becomes a huge commotion. Who will finally win that chaotic race?

In The Great Cow Race, volume 2 of this 9-book epic, Fone Bone and his cousins plan to return home after visiting the village of Barrelhaven with Thorn and Gran’ma Ben. But Phoney risks everything on one last get-rich-quick scheme for the town’s annual Great Cow Race.As usual, Phoney’s plans go disastrously awry, and Boneville seems further away than ever. Meanwhile, ominous signs indicate that a war is brewing, and Fone finds himself helping his friends defend their valley from a formidable enemy.