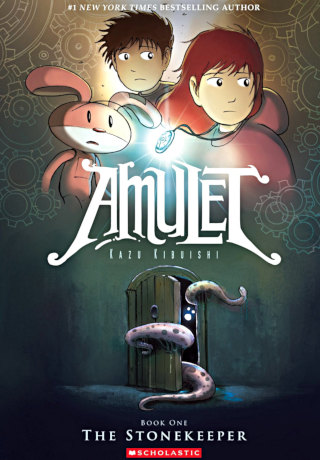 Amulet is a children graphic novel series by comic writer and illustrator Kazu Kibuishi. Originally published in 2008, Amulet 1: The Stonekeeper is the first book in the series. The book follows the thrilling and magical adventures of Emily and Navin Hayes, sister and brother who in pursue of their kidnapped mother into an unreal world. Emily has found a magical amulet that gives her the power to survive in the strange place. They also get the help of some mechanical robots, one whom is Miskit the rabbit.

Preview of Amulet 1: The Stonekeeper by Kazu Kibuishi (from Scholastic)

After the tragic death of their father, Emily and Navin move with their mother to the home of her deceased great-grandfather, but the strange house proves to be dangerous. Before long, a sinister creature lures the kids’ mom through a door in the basement. Em and Navin, desperate not to lose her, follow her into an underground world inhabited by demons, robots, and talking animals.

Eventually, they enlist the help of a small mechanical rabbit named Miskit. Together with Miskit, they face the most terrifying monster of all, and Em finally has the chance to save someone she loves.

One Reply to “Amulet 1: The Stonekeeper Graphic Novel”