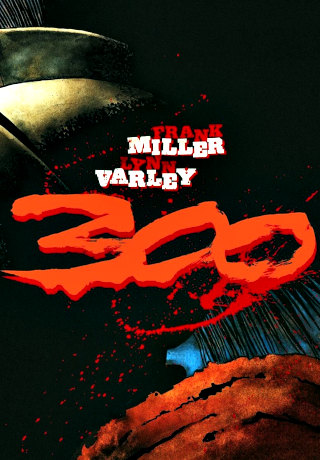 Since its first publication, Frank Miller’s 300 comic series has captured everyone’s attention, readers and critics alike. Originally released in 1998 by Dark Horse Comics in five monthly issue comic books, the work was collected as a graphic novel in 1999. Since then, it has become a worldwide bestseller and won numerous prestigious awards including three Eisner Awards in 1999.

300 graphic novel by Frank Miller marvelously recount the one of the most spectacular moment of battlefield valor in history. In this comic series, Miller masterfully captures the historic battle of Thermopylae. In this battle, Leonidas the Spartan King and his small army of 300 men heroically confront the invasion of the vast Persian army. Led by Emperor Xerxes, the Persians are intended to bring Greece under the empire.

However, despite the benefit of having a sheer amount of strong soldiers, Xerxes will soon find out that his dream of invading Greece is not an easy task. Between Xerxes and his huge army stand an unbelievably mighty strength of 300 Sparta warriors and the out-worldly brave King Leonidas. With insurmountable valor and unbreakable formation discipline, the small band of 300 men repel and even destroy the waves of attacks from the much bigger Persian army.

With 300 graphic novel, Frank Miller has successfully delivered a monumental moment in history. His interpretation of the world at that period of time is fascinating and the way he pictures the valor of the Spartans is simply remarkable. The story is bluntly to the point and unadulterated, while the artwork is intense, theatrical, and moody. Those combination makes Frank Miller’s 300 graphic novel a thrilling and captivating read.

Preview of 300 by Frank Miller (from Dark Horse Comics)

The armies of Persia—a vast horde greater than any the world has ever known—are poised to crush Greece, an island of reason and freedom in a sea of madness and tyranny. Standing between Greece and this tidal wave of destruction are a tiny detachment of but three hundred warriors. Frank Miller’s epic retelling of history’s supreme moment of battlefield valor is finally collected in a glorious hardcover volume in its intended format—each two-page spread from the original comics is presented as a single undivided page.